Wargames, politics and ethics #2: Politics? You can run, but you can't hide

A book I picked up on sight from a recommendation on the WW2 SS Counter Colours thread, Ronald Smelser and Edward J. Davies II's 2008 scholarly study, The Myth of the Eastern Front: the Nazi-Soviet War in American Popular Culture was going to become an article even as I first read it – avidly – over xmas last year. Researching for this series- in which The Myth of the Eastern Front was going to feature centrally, I found the military hobbyists' inevitable internet hot flushes in its wake. Inevitable? In response to an academic tome?

Yes, because The Myth of the Eastern Front is part analytical historical deconstruction, and part broad-brush polemic against the 'romancers'- promulgators of an idealised vision of the Wehrmacht and the SS as honourable soldiers fighting a 'Lost Cause' against the Red horde. Smelser and Davies root this mythology in the Wehrmacht's 'last campaign': the ex-generals' postwar years of networking and spin aimed at rehabilitating the image of the German armed forces on the Eastern front.

Email ThisBlogThis!Share to TwitterShare to FacebookShare to Pinterest
Labels: a turn of the crank, books, gamers.net, meanwhile..., reviews 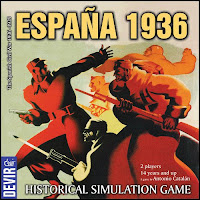 Regular readers will be well aware that I'm not a negative reviewer as a rule. It's too easy to find negativity on the web, and the first editorial decision I made way back in 2005 was that I wasn't going to contribute to it here at RD/KA!. Also, when I review anything, I've paid for it and therefore have a good reason to want to like it. Every so often though, something comes along which disappoints me sufficiently to prompt a distinct lack of enthusiasm to which I cannot but give vent. Antonio Catalán's game of the Spanish Civil War- España 1936, is a case in point.

Dust off and dust-up
España 1936 is a game I bought on sight when I saw it in Static Games, an FLGS: the subject of the Spanish Civil War interested me and the box ad-copy showed nice-looking components. It then joined my collection of dust-gatherers, where it stayed for a good three years. Only recently, with Liam's newfound enthusiasm for strategic boardgames, did I begin to think that I might finally get a chance to bring España 1936 to the table. My thinking was this game would serve as a useful bridge between Labyrinth and Twilight Struggle on the one hand, and games like Unhappy King Charles! on the other.

And so, on Wednesday night Liam and I sat down to have a go. Five hours later, I'd won the game, but España 1936 had lost the vote of confidence.

Reality bites
At some time or another, many wargamers will have found themselves pondering the political and/or ethical implications of their passion for revisiting the past, present and future battlefields of the world with their maps and little counters. This reflection leads some to create boundaries and/or preferences: periods they won't game, sides they always prefer to play, and so on. For me this began in my teenage-tankie youth, when I drew a boundary at 1945. My reasons for this were twofold:
I abandoned this boundary as I grew older. That's not to say that I 'grew out of it', because that would be to imply that there's something immature about the choice to draw and to exercise such boundaries. I've no wish to be so insulting to others who've made these choices.

Email ThisBlogThis!Share to TwitterShare to FacebookShare to Pinterest
Labels: a turn of the crank, boardgames, gamers.net, meanwhile..., personal, Squad Leader

A bit of this and a bit of that

Technical problems stop the Panzers in their tracks
Badger came round last night for what was supposed to be another session of Fighting Formations and perhaps some Combat Commander. Unfortunately events were to intervene in the form of the shiny new desktop PC which I had taken delivery of just the previous day. I hadn't had time to set everything up that Thursday, so on the Friday I decided just to wait for Badger's arrival so that he could offer his assistance. It's not that I'm a complete tech-idiot or anything but there are always risks associated with transferring your old system to a new machine, so I felt it would be useful to have Badger on hand.

Just as well too it turned out.

The long dark night of the dice rolls #2: light at the end of the tunnel

I wrote last time about some of the highlights in recent multiplayer gaming. Today, I'm going to look back at some of the 2-player fun I've been having. When the Sunday sessions dried up I came to realise that the last couple of months of Sunday gaming had been slightly frustrating: we'd been playing too many light Euros. It's not that I don't like these games- I do; it's just that I wanted some meatier fare, with the lighter games filling their proper role, namely filler. I'm pleased to say that I've managed in the past couple of months to satisfy this desire to a significant extent. Regular readers won't be surprised that Badger and I have been keeping up our regular Combat Commander games. We've mostly being playing our way through the Combat Commander Battle Pack #3: Normandy. The scenarios start at the beginning, with Operation Deadstick- the Ox and Bucks' coup de main at the Bénouville (later Pegasus) Bridge in the early minutes of June 6th 1944; and finish at the end, with the 1st Polish Armoured Division's stand on Hill 262 ('The mace') during the battle of the Falaise pocket in late August. In between there are beaches to fight your way off of, beachhead fortifications to overcome, lots of bocage to fight your way through, villages to capture, and a couple of scenarios featuring French Resistance forces to boot.