Sunday session postponed by riotous assembly, and other stories

Facebooking last week I decided a day in Edinburgh was called for Saturday. The city of my birth, my student days and some years beyond, Edinburgh is a city of strong associations for me, one in which some of my oldest friends still live. So you can imagine I was expecting to enjoy myself.

Before heading out I made sure to attach the carrying strap to my digicam (Samsung P1000). 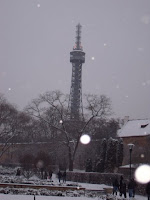 Poking the thing through an open window, some 60m up, of Prague's Rozhledna (Petrin Observation Tower) to take these pictures had convinced me of the importance of that piece of kit, which I'd stupidly decided wasn't needed when I took the camera on holiday for the first time!

I visited the Petrin twice. The first day was the day I was mugged by the sheer cold. Catching the tram into the city centre I missed my stop and got lost. Wandering around in blind circles for what seemed like an age was cold and miserable until I hit on the downward sloping streets. By the time I reached the Vltava I needed to stop at the already familiar Cafe Slavia, upon which I'd happened.

Warmed up, and revived by coffee and a sandwich I set off again. Crossing the most Legii (Bridge of Legion) to reach Malá Strana (the Lesser Quarter) I suddenly walked out into cold more bitter even than that I'd experienced tramping up from the station to the Hrad Karlštejn the day before. It felt crippling. Completely exposed to the elements; gloves serving little purpose other than to cover frozen ears foolishly unprotected by any hat; I was so cold that it seemed utterly pointless to continue into the quickening dusk a journey which had already taken me some 3 or 4 times as long as the simple 30-minute jaunt I'd expected to this point. I was after some photos after all. I actually spent some 5 or more minutes just standing out there deciding what to do. Believe me that standing still didn't seem to make me feel any colder than moving did!

But I wanted those levels in Tourist, so I pressed on. By the time I'd taken a seat in the Petrin Hill funicular railway I was literally dazed with the cold (that's literally literally, not figuratively literally). And it was too dark to take any photos, so I didn't bother with the Rozhledna until I returned the next day to take these other pictures from the observation platform.

The Charles Bridge from the Rozhledna

It was at least as cold the day I took these pictures as it'd been the day before, but I was mentally prepared this time; I made sure I got in and out quickly; and I fortified myself with some hot wine in the Rozhledna cafe before heading back down across the Vlatva into town.

Meanwhile, back in Edinburgh on Saturday my expected rendezvous for dinner with my old friend Hugh (last seen here, and here, at DiceConWest'07) turned into a Saturday night in the pub with the rest of the old Edinburgh mob, among whom Jim might be remembered by regular readers as the anonymous gamer with whom "I perfected the grub-and-gaming trick" using the original Squad Leader. By this time any notion of returning to Glasgow that night was long forgotten.

In the pub Hugh, Jim and myself - grognards and avid readers of military history all 3 - somehow found ourselves broaching the still vexatious topic of whether or not Britain and France could actually have won a quick war against Germany if they'd gone to the aid of Czechoslovakia in 1938 instead of staging the shameful Munich fiasco. Hugh and Jim both insisted over my voluble scepticism that new research had demonstrated conclusively that this was quite simply logistically and militarily impossible, naming more than 1 book as evidence. I'll be adding these to my read pile as quickly as possible once I'm reminded of their titles. Hmm. This should prove interesting. ;)

Hi there. Long time since i commented here. Nice to see you are still going strong.

Couldn't help respond to the issue of your 1938 hypothetical. In the scenario, if the czechs were involved also I'd certainly put my money on the anti-fascists. That, afterall, was one of the reasons that so much effort was put into chopping them up diplomatically in the first place?

If you play East Front, we could even organise some online scenarios to check out my theory...

Hello again AP. Thanks for your kind words. And yes, as long as I've got time to play games, I guess I'll find time to blog about them too.

On the Czech thing: you're repeating what I've long thought, which can be summed up as:
1. The German army in summer 1938 wasn't the machine it became a year later.
2. The Czech army was materially and strategically in a position to wage a defensive war which should've been able to buy time for an Anglo-French attack on Germany that could've succeeded because of the preceding point.

Apparently the new research is confirming that the Anglo-French armies of summer 1938 were simply as incapable of winning a fighting war against Germany as they were a year later. Like I said, interesting stuff.

Also, I forgot to add that I visited the Prague war museum after I'd taken those photos from the Rozhledna. It was small but interesting, although unfortunately nearly all in Czech.

There was a fascinating video of actual newsreel footage of the Czech mobilisation of summer 1938. I have to confess that some of it did give me pause for thought in respect of my estimation of the capabilities of the Czech military back then; eg. the clips showed biplane fighters, which presumably would've been outclassed by the Luftwaffe's Me109's.

So I'm really not sure if my old views can hold up. Which is why I really want to read those books! ;)

Well, it's good to see our Sunday session was called off for a genuine emergency, and not just because you cancelled our arrangement to visit your better friends. :-p