Prague games roundup #2: the Up Front 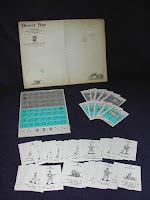 Readers curious enough (verb and adverb? -: you decide) recently to have checked out my boardgame collection over at the BGG might just have noticed the addition late last December of Desert War, 1984's 2nd and final official Avalon Hill expansion to the legendary Up Front WW2 tactical CDG. I've never owned this, and only played it a few times with (IIRC) 'Uncle' Martin's copy, so you can imagine how pleased I am finally to have picked up a copy via the ubiquitous ebay. And I must add that I was really delighted when I eventually realised that I'd picked up a fully-expanded Up Front set for little more than what I'd've paid back in the early 80's when it was all originally released.

Of course, I had other plans for the bits of this bargain which were already in my possession: they were to go to Prague with me as a present for Bill (a gamer and his Up Front should not be parted!). Which led, naturally enough, to some games after we'd finished Warcraft: the Board Game.

Patrol was the familiar place to start, random selection giving Bill the Germans against my Russians. Bill went for the familiar 2-group setup featuring a strong 6-man firebase at group B, and the 'wimps' at group A. I chose to go with the 3-group Russian setup I've adopted from 'Uncle' Martin's approach. This retains the 4-man assault group and the 7-man firebase already familiar to Up Front veterans - at groups C and B respectively; it simply puts the Russians' 4 wimps into a single group A.

My firebase was quickly able to advance to Range Chit 2 before the German firebase got off its startline. This put the Germans into their most feared position against the Russians; namely their firebase being forced to make its 1st bound into the teeth of the Russian RR3 killzone. I also managed to get some good cards (an early wire or somesuch IIRC) so that Bill's group was left pinned in poor cover while I just chucked hand after hand searching for fire attacks to rain down on his hapless men.

I got some good kills before Bill got himself out of the hole and regrouped. Well behind now, and needing to pull something special out of the hat to save the situation, Bill's best efforts proved insufficient and I won a comfortable VP victory at game end.

I was quite happy to go along with Bill's desire for a replay. Unfortunately Bill's firebase made its 1st bound first, leaving my Russians facing the German long range firepower advantage. The details that I can remember are vague, but involve much effort on my part to rebuild a badly mauled firebase by transferring into it all the men from the assault group; all to no avail I have to note. I seem to remember that I'd finally transferred Sgt. Rostov when the essential futility of the situation bore down upon me. Whatever, I lost.

Rumble in the jungle 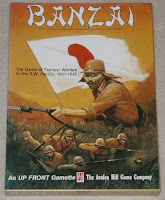 At 1-all it was clearly time for a change of pace. Sure enough, Bill's choice was the inevitable Jungle Meeting Engagment, which gave him the Japanese. I ended up with the British. I confess to a sinking feeling as this all unfolded, but I went ahead with traditional pluck all the same.

Y'see past experience with the Brits against the Japs in the jungle, which had been confirmed by my Russian victory earlier that night, had taught me the absolute importance of your firebase making its 1st bound before the enemy's firebase makes its 2nd. Time after time my Brits'd lost games against the Japanese when I'd let them make those 2 bounds. So Bill was audibly surprised when he saw my firebase go straight to open ground after they'd moved almost immediately off of their baseline. But his Japanese had already moved off before me; I had no terrain; and I certainly wasn't going to waste any time before opening fire, not to mention not leaving my firebase open to streams or marshes.

Unfortunately for me, Bill had a fistful of wire cards (or something like that?). By the time my hapless firebase had reorganised itself, it was a 3-man group from which I'd already lost 4 other men (I was doing a lot of transferring again). So, I wasn't making my first bounds into the Japanese firebase's killzone, but I had 6 men facing an intact Jap squad. One thing was for sure, I wasn't going to get anywhere just sitting around, so some kind of advance was necessary. But just moving forward would surely prove fatal; all the more so since I was just so sure that Bill had a marsh or stream waiting for any of my groups which moved.

Twisting on the horns of this dilemma, I decided to transfer my Bren into the assault group. This done, I sat around twiddling my thumbs for a few turns more before I finally noticed that group C - now containing a Bren at RR2 - was actually flanking Bill's firebase (I'd done this ages previously for card cycle and to prevent Bill from flanking my group C). So I opened fire with the 13FP this gave me. Before either of us knew where we were, Bill's 7-man firebase was a 2-man LMG team. I was back in the game.

I knew what was to come, naturally enough: Bill's assault group were coming forward so that Sgt. Okimoto and his lads could save the day with a bit of bayonetting. So I started collecting cards to stop them. I didn't see any streams or marshes, but I did end up with 2 wire cards ready to play when they hit RR5.

Before that though, Bill threw his 2 wimps forward as a stalking horse. They died quickly enough to satisfy me. Meanwhile, a RR4 fire attack from my LMG group against Bill's assault group broke Sgt. Vasey's sten, which I was unable to repair before the Jap assault group made their final charge; by which time I was in the process of transferring a 5th man into my LMG group, with the effect that neither group was able to move when those mad bayonet men closed in for the kill.

With Okimoto and his lads at RR5 I slapped down those wires, which both stayed, to my satisfaction. My LMG group opened fire before Cpl. Barnard managed to infiltrate the Jap group to hinder their own infiltration. Moving and under 2 wire cards, I really hoped that that'd be enough so that I'd mow Oki's men down in droves sufficient to win the day (I had to kill 3 out of 4). It was not to be though. With a broken sten gun and a man caught in individual transfer both my firepower and my mobility were seriously hampered. So I threw Cpl. Barnard into close combat in a desperate ploy to turn things round with a bit of sheer dumb luck. Barnard died, mourned even by his enemies.

The wire was gone by about now, and Bill had started his infiltration. Once his group hit cover this was inevitably successful, which led equally inevitably to the close combat kill which won Bill the game because he'd broken my squad. Argh! I'd been so close, especially when I looked back to the moment when Bill's movement and those 4 quick kills had given him a VP cushion I'd imagined was impenetrable. It was a great game!

Email ThisBlogThis!Share to TwitterShare to FacebookShare to Pinterest
Labels: boardgames, got game, Up Front

Fantastic collection! Oh my, oh my... And you still got a copy of Space Hulk. Given away mine ages ago. Then again I have been playing the Game of Thrones recently...

My Space Hulk collection is large (2x 2nd ed. sets, and the complete 1st ed. with expansions), and prized. I haven't played it in years, but that doesn't mean that I won't get back to it sometime. :)

And Game of Thrones? I've enjoyed a few of the books, and have wondered if the game would prove suitable for a Sunday session. Blog it old gnome, blog it! ;)

Oh, I definitely will, after I've played it a couple more times. Trouble is it's at its best with 5 gamers. For now imagine a hybrid of Risk and Diplomacy with a few extra bits and no dice. Great game, really. Simple, deep and fun I'd say.

You make this game sound all the more appealing gnome. I can easily imagine dropping the cash for it should I need some retail therapy one of these days. ;)

Or you could drop by my place for an evening. Already got two mates lined up for board gaming. Well, once a month at best, but that's something...