The fickle finger of fate 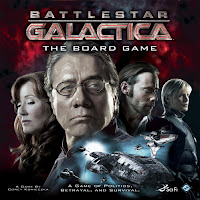 All present and correct come lunchtime, Andy, Donald, Tony and myself set straight to the game of Battlestar Galactica to which I, for one, had been looking forward all week. There was quite a lot to play for this week. Would the humans win out over the Cylon menace? Would BSG prove to be more than just a flash in the pan?

Tony got 1st player, and took the opportunity to cast himself as our resident hotdog pilot and glamourpuss, so that this week's lineup was:

Andy had the last pick after I'd chosen Zarek, which put him in the position of being able to choose whether to be President or Admiral himself (he wanted a change from playing a Support character after last week), so choosing whether I'd be President or Donald would be Admiral. In the end I was cut out of the privileges of office, which I didn't mind too much.

Our game opened much better than had last week's. We fought off the Cylon opening attack without too much difficulty before executing a jump which though quick, wasn't quick enough to stop Centurions boarding the Galactica. Zarek's role in all of this was outstanding (as you'd expect of a true human): first he shot down one heavy raider and then he destroyed the rampaging Centurions. That wasn't the end of Zarek's heroics, which also included making an emergency jump on a roll of 8, and repairing the armoury (with the card I'd drawn when I'd managed to sneak in a 'Consolidate Power' action).

We were doing really well, even though there were early hints at Cylon infiltration. Too well as it turned out. Tony used Starbuck's Secret Destiny to swap a Besieged Cylon attack crisis card only to turn up the Heavy Assault Cylon attack instead. We jumped out, so that we finally hit our 1st Sleeper Agent Phase. Doing as well as we had been, we had all of our resource dials in the blue so that Tony - dealt the Sympathiser card - immediately became a revealed Cylon. Two Cylons? Oh dear, I thought. Still, I thought our resources should hold out.

They did. It was just that we couldn't.

Andy revealed himself as a Cylon soon enough, so that he could pile on the pressure with the really rather nasty stuff the Cylons can do to the humans, whose fate now rested in the hands of an alcoholic admiral and a criminal. We actually managed to jump all the way to our last departure point for Kobol. By this time our resources were borderline. Before we knew where we were, 2 heavy raiders were the only Cylon ships not in play, Centurions were rampaging all over the Galactica, and it was taking serious hits from the basestars too.

All that Donald and I could was hang in there and hope to jump out before it was too late. Well OK, Donald did have a couple of nukes at his disposal, which he'd strangely forgotten all about. He managed to use one of those to take out a basestar, but it was still looking very bad. Even so Andy and Tony didn't dare take anything for granted, because they could see that we just needed a couple of good card draws to pull it off. They were both so tense that they played the last minutes of the game on their feet, willing the action on. Donald and I, on the other hand, were hunkered down at the table, reflecting the desperation of our characters' struggles.

It was the Centurions that got us in the end. We were just 2 steps on the jump-track from jumping out to Kobol.

I'm still liking this game a lot. The ramifications of the hidden Cylon rules grow more interesting each time we see them in action, while the card-driven solitaire engine slickly drives the game really fast without the mechanics' forms being a burden on the engine's narrative. And this game really does have a great narrative thrust. You just can't help but put the game's events together into their own story; eg. when Tony used Starbuck's special ability to save us from a Cylon attack, only to draw an even worse Cylon attack card, we couldn't help but point out her obvious treachery when Tony turned Cylon upon drawing the Sympathiser card shortly thereafter. This is a great game for table talk in other words.

I know we'll be back to this, and quite soon I'm guessing. ;)

Ain't just whistlin' Dixie!
Not mentioned in last December's 'My 2009 gaming wishlist' articles (#1 - check; #2 - check; and #3) were my hopes that we'd get a Crimson Skies campaign running. Andy and I had strung together a few games last year, which we'd both enjoyed, so he was on board at the very suggestion. Donald and Tony didn't take any persuading. So after BSG on Sunday, Andy sat down and worked out which factions were available from his collection of the F.A.S.A. and Wizkids models, we rolled a few dice, and made a few choices. Our factions and planes are below.

Note that these are just aircraft identification pictures. Photos of Andy's lovely painted models will follow ASAP. We didn't have time to get started on Sunday, but we'll get going in a couple of weeks. ;)

Related@RD/KA!
Battlestar Galactica boardgame:
- My 2009 gaming wishlist #2
- Done down by dastardly Donald's devious duplicity!
- Toasters, toasters, everywhere!
- A moment to marvel at...
- The end is nigh?
- What price survival?
- Again, the toasters' offensive

Email ThisBlogThis!Share to TwitterShare to FacebookShare to Pinterest
Labels: boardgames, BSG, got game

Those Crimson Skies minis are beautiful. Time to get them painted methinks.

What I guess I should've explained when I said that those were just "aircraft identification pictures" is that they were culled from Ral Partha Europe's site. This was the only place I could find a set of pictures with a uniform style. Andy's already got his Crimson Skies minis painted, which is one of the reasons we like playing it so much. ;)

Actually, I think Donald will be flying the Wizkids prepaints. Still, they're not bad either.

Andy? That famous boardgame designer from the 1970's? Redmond A. Simonsen. The man's legendary among boardgamers of a certain vintage, so I think it's a cinch that Redmond's Gang are named after him. ;)

It could be a cinch, were it not for the fact that it's Redmann's Gang. :-p

Gah! How did I miss that one? Drunkeness? Creeping senility? Other distractions? Answers on a postcard please... ;)

"Roll dice and kick ass!" by John McLintock is licensed under a Creative Commons Attribution-NonCommercial-ShareAlike 3.0 Unported License.
I assert my moral rights.
All proprietorial and moral rights acknowledged.
I reserve the right to restrict and/or withdraw any and all permissions.
Share |